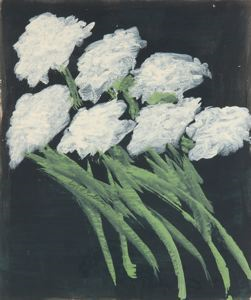 
Since her discovery in the late 1960s, native Alabamian Sybil Gibson's work has been exhibited in over 50 one-woman shows. She has been called a "naive" or "primitive" artist because she is essentially self-taught. Faces, flowers, and female figures, particularly little girls, are common elements in her works, though her compositions vary widely in mood from innocent to disturbing.
The painting in the MMFA collection is from Gibson's "late period", after cataract surgery. Works from this time retain the general characteristics of Gibson's earlier works, particularly minimal backgrounds and a lack of detail.

Untitled (Floral Arrangement) dates from the last period of her career, a few years before her death in 1995. By this time, the artist suffered from poor eyesight and declining health, and her work of this period tends to be graphically bolder both in scale and in contrast. In her last years Gibson convenyed the final flowering of excitement at the world she saw around her, painting from life rather than from memory, as she had done earlier in her painting career. Flowers were common subjects though she concentrated on them more heavily in her late works.

Your current search criteria is: Keyword is "W" and [Object]Century is "Twentieth Century".