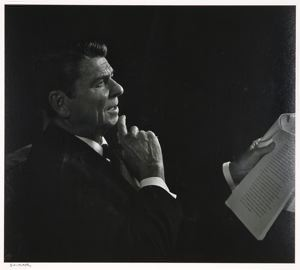 
Ronald Reagan (1911â2004)
The 40th President of the United States was once a celebrated actor. After a role in Barry Goldwaterâs 1964 presidential campaign, Reagan ran for governor of California in 1966. He won, served for eight years, and ran for president several times afterwards. In 1980 he was elected. After reelection in 1984 he became at 73 the oldest man to be inaugurated President. The popular president granted Karsh a lengthy portrait sitting. The slightly horizontal format is unusual for Karsh, but it accommodates the inclusion of Reaganâs papers. Reagan was noted for writing many of his own speeches throughout his career.

Keywords Click a term to view the records with the same keyword
Portraits
Political
Male
Suit
Reading Material
United States Government
Portfolio List Click a portfolio name to view all the objects in that portfolio
This object is a member of the following portfolios:

Your current search criteria is: Keyword is "VH".