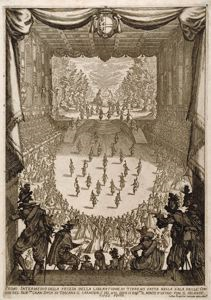 1617
From the series, The Intermezzi (Les Intermedes)


Within Callotâs print oeuvre, images of theatrical performances and performers were important subjects, particularly during his residence in Florence between 1612 and 1621. This print is one of three etchings that illustrate the play, La Liberazione di Terreno e dâArnea Autori del Sangue Toscano (The Liberation of Tirreno and Arnea) written by Andrea Salvadori and performed during carnival in Florence. It was presented at the Uffizi Palace on February 5th, 1617 to celebrate the marriage of Caterina de Medici, sister of Cosimo II, to Ferdinando Gonzaga, the Duke of Mantua. The performance was held in the Theater of the Offices (also called the Stanza Grande, or the Scala delle commedie), a large room on the second floor of the palace. The room was not used after 1628, and Callot was the first and last to depict the niche sculpture and the decorative program in this performance space.

Keywords Click a term to view the records with the same keyword
Mythological
Theatrical
Interiors
Theatre
Palace
Play
Ballet
Portfolio List Click a portfolio name to view all the objects in that portfolio
This object is a member of the following portfolios:

Your current search criteria is: Keyword is "SO".