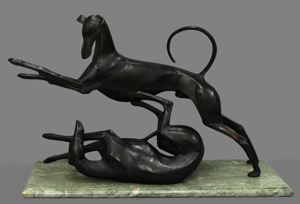 
Sculptor William Hunt Diederich was born into a privileged family in Hungary. His father raised horses for the Prussian cavalry and his mother was the daughter of renowned American painter William Morris Hunt (and the niece of prominent architect Richard Morris Hunt). Diederich studied at the Pennsylvania Academy and in Europe, and exhibited internationally. Today he is recognized as a sculptor, but also as a designer of functional, but decorative metalwork including wrought iron and brass objects, fire screens and weather vanes.

In the mid-1910s Diederich created several different sculptures depicting greyhounds, two of which are currently owned by the Seattle Art Museum and Whitney Museum of American Art. The MMFA 's work is very similar to Seattleâs "Greyhounds Playing" of 1920, but is slightly smaller and the composition is more compact. "Playing Greyhounds" clearly demonstrates Diederichâs portrayal of the breedâs personality, his mastery of design, and his craftsmanship.

Keywords Click a term to view the records with the same keyword
Dogs
Leisure Activity
Play
Portfolio List Click a portfolio name to view all the objects in that portfolio
This object is a member of the following portfolios:

Your current search criteria is: Keyword is "SO".