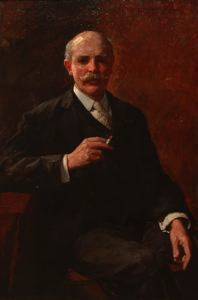 
Frederick Warren Freer painted this self-portrait only five years before his untimely death at the age of 59. His extant works, together with contemporary published accounts, demonstrate that he was an accomplished artist who was part of the mainstream of American art at the turn of the twentieth century. This intriguing visual record of a man who was repeatedly described as a âdistinguished painterâ conveys something of his spirit as well as his appearance.

The dark tonality, with its emphasis on loose, gestural application of the oil medium, points to Freerâs Munich training. Dramatic lighting from the left emphasizes the figureâs solidity, as does the vigorous, painterly modeling of the hands and face. The work presents the artistâs vision of himself as a genial, urbane man of arts and letters whose demeanor is given a studied, casual air by the cigarette he holds in his hand.

American Paintings from the Montgomery Museum of Fine Arts, 2006, cat. no. 29

Keywords Click a term to view the records with the same keyword
Portraits
Figure
Male
Chair
Suit
Hands
Name as part of work
Cigarette
Artist's Self Portrait
Portfolio List Click a portfolio name to view all the objects in that portfolio
This object is a member of the following portfolios:

Your current search criteria is: Keyword is "SA".