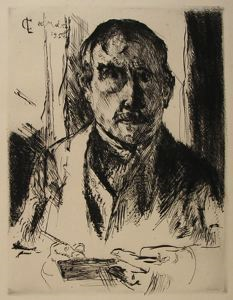 
Lovis Corinth was a German artist of the turn-of-the-20th-century, who has been long neglected internationally. His dramatic paintings and dark, moody graphics place him in a no-man's land between the 19th-century academic tradition and the early 20th-century Expressionists. The quality of his work has sustained a faithful following for him in Germany.

Corinth's prints make up a large portion of his oeuvre; nine hundred and eighteen have been catalogued. His friend, Hermann Struck, encouraged his printmaking, which resulted in Corinth producing prints at an increasing pace from 1908, until he was making over one hundred a year by the early 1920s. He favored drypoint over etching, but he chose lithography as the technique for book illustrations.
Stylistic changes came after the artist suffered a stroke that left him partially paralyzed and caused his hand to tremble for the rest of his life. Dealing with this handicap led to an emotional struggle questioning how to persist as an artist. His subjects became grounded in the brutal honesty of emotions.

This work is one of the 20 signed examples on Butten paper, printed by Verlag Fritz Gurlitt, Berlin, for the deluxe edition of Corinth's, Gesammelt Schriften (Collected Writings).

Keywords Click a term to view the records with the same keyword
Portraits
Male
Artist's Self Portrait
Portfolio List Click a portfolio name to view all the objects in that portfolio
This object is a member of the following portfolios:

Your current search criteria is: Keyword is "SA".