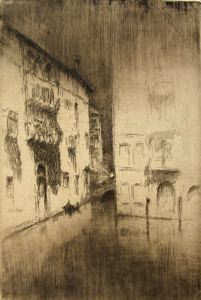 
As with Canaletto (Italian, 1697â1768), Whistler found Venice to be a source of beguiling imagery for his etchings. Whistlerâs vision of the city is often more poetic and evocative than descriptive, as is suggested by the vague titles of many of his prints, such as "Nocture: Palaces." Like Canaletto, he sought to capture the atmosphere of the city, but he did so in a very different way. His use of heavy plate tone and trembling, almost ghostly lines give the buildings a feeling of otherworldly impermanence, as though they were as transient as their reflections in the canals below.