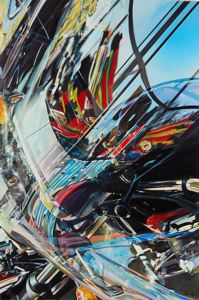 
David Parrishâs work is related to Photo-Realism, but it can more accurately be described as photographically derived, that is, suggested by photographs taken by the artist. Whereas painters have traditionally used drawing to create compositional studies, Parrish uses photography, experimenting with the camera to find the right balance of elements.

Parrish attended the University of Alabama, graduating with a BFA. In 1961 he went to New York City, later returning to Alabama to live in Huntsville, where he worked as a technical illustrator for NASA. In this capacity, he grew accustomed to depicting industrial and aeronautical machinery. In the 1970s, he began to apply his expert draftsmanship in his personal work, painting highly detailed images of motorcycles.

Parrish made "Royal Chevy" by projecting a color slide onto a canvas and lightly sketching the composition in pencil. Using this sketch as a guide, he elaborated upon the composition, applying oil paints with a fine tipped sable-hair brush.

The artist working on Royal Chevy in his studio.

The artist in his studio.
Portfolio List Click a portfolio name to view all the objects in that portfolio
This object is a member of the following portfolios: