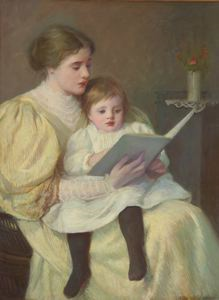 
Frederick Freerâs reputation in the 1890s was based primarily on his work as a portrait painter, and particularly on depictions of beautiful women. "Nursery Rhymes" is believed to portray Freerâs wife, Margaret, and their daughter Catherine. Unlike Freerâs earlier works in the Munich style, this painting is constructed to accentuate the exquisite pale tonalities of skin and fabric; softened contours convey the affection, innocence, and gentleness of the mother-and-child relationship. The medium is applied with a light touch suggestive of pastel.

The painting remained in Freerâs possession, and then in his wifeâs, perhaps because of the melancholy fact that Catherine died as a toddler. This work may have been one of only a few images to commemorate her brief life.

Keywords Click a term to view the records with the same keyword
Figure
Female
Genre
Mother
Child
Flower
Book
Chair
Table
Porcelain object
Portfolio List Click a portfolio name to view all the objects in that portfolio
This object is a member of the following portfolios:

Your current search criteria is: Keyword is "RF" and [Object]Display Artist is "Frederick Warren Freer".