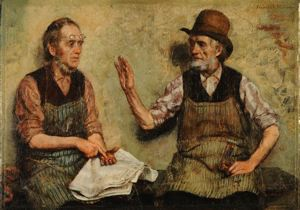 
"Politics" reflects the popularity of genre subjects in the late the nineteenth century, a period in which casual political debate was still a popular pastime, particularly in smalltown American communities. Freer's composition suggests that one of the hallmarks of democracy in the United States was the active participation of the working classâhere he shows two elderly men engaged in a lively debate, presumably over a topic gleaned from the newspaper in the lap of the figure on the left. Both men wear worn, soiled aprons and the figure on the right holds a carpenter's square, suggesting the men's occupations. Their hand gestures and eye contact confirm that the discussion is spirited.

The composition and the style of "Politics" reflect Freer's training at the Munich Royal Academy. The figures are closely observed, with a warm tonality enriching the harmonious coloration of their skin, hair, and clothing. They are positioned against a flat, vacant wall, which pushes them to the front of the picture plane, thus focusing the viewer's attention on their worn faces and their physical interaction. Through these techniques the artist has portrayed a vignette of community life representing an important themeâfreedom of expressionâwhich was central to the growth and prosperity of American society.

Keywords Click a term to view the records with the same keyword
Male
Eye Glasses
Hat
Newspaper
Portfolio List Click a portfolio name to view all the objects in that portfolio
This object is a member of the following portfolios:

Your current search criteria is: Keyword is "RF" and [Object]Display Artist is "Frederick Warren Freer".