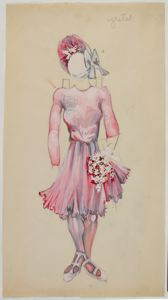 The paperdolls of the 1940s reveal both the artist's distinctive style, as well as her craftsmanship. The works are both whimsical, as well as creative. Two of the dolls in the Museum's collection depict figures fairy tale characters, Hansel and Gretel, with a theatrical flair. The figures themselves are carefully conceived, drawn in pencil, and then washed with watercolor and gouache. All are reminescent of the muscular, but graceful figures she painted in her oils recalling her ties to the ballet and stage design.

Gretel (Costume)
1986.0004.0004.0003
Portfolio List Click a portfolio name to view all the objects in that portfolio
This object is a member of the following portfolios:

Your current search criteria is: Keyword is "PB" and [Object]Century is "Twentieth Century".