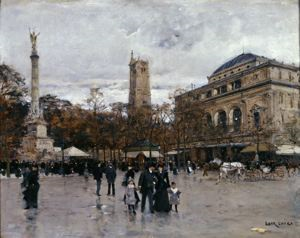 
The Theatre Sarah Bernhardt is an alternate name for the Theatre de la Ville, or City Theatre, located on the Place Chatelet in Paris. Built for Baron Haussmann between 1860 and 1862 during his renovation of Parisâ built environment, it was renamed for the renowned actress Sarah Bernhardt in 1899. For the next 20 years the actress produced plays for the Theatre and it became one of the most respected theatrical venues in all Europe.

Keywords Click a term to view the records with the same keyword
Cityscapes
Figure Groups
Horses
Street
Child
Church
Street
Cloudy Sky
Carriage
Outdoor Sculpture
Theatre
Fall
Leisure Activity
Landmarks
Portfolio List Click a portfolio name to view all the objects in that portfolio
This object is a member of the following portfolios:

Your current search criteria is: Keyword is "OR".