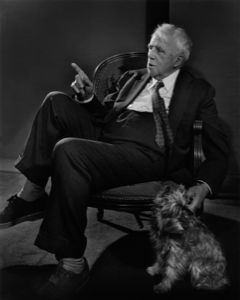 
Robert Frost (1874â1963) Following the death of his father, Frost moved with his mother to New England, the setting for most of his poems. Although Frost wrote of the character, people, and landscape of New England, the despair and delight in his poetry is universal. He was awarded the Pulitzer Prize for poetry in 1924, 1931, 1937, and 1943.

Keywords Click a term to view the records with the same keyword
Portraits
Male
Chair
Suit
Humanities
Dog
Portfolio List Click a portfolio name to view all the objects in that portfolio
This object is a member of the following portfolios: