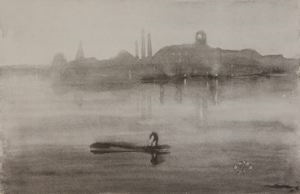 
Invented in the late eighteenth century, fine art lithography first flourished in the nineteenth century and Whistler was a master of this medium. To make a lithograph, an artist can either work directly on a lithographic stone or draw with a lithographic pencil on special paper. When the drawing on paper is placed face down on the lithographic limestone surface, the greasy pencil marks are transferred to the stone, which is then printed as usual. Although lithography could successfully imitate either pen lines or the softer appearance of chalk and was often used to reproduce drawings, artists also experimented with the technique and used it in many other ways. Although he often drew on paper, this lithotint was worked directly on a previously tinted stone, using both ink and chalk. Whistler then scraped away the areas that he wanted to print as lighter passages. In the 1870s, Whistler had occupied himself painting many night scenes of the Thames River shrouded in mist. He produced at least thirty-two examples of paintings of this type, and this lithotint produced in 1878 mirrors that approach in depicting the river near Battersea. This was a portion of the riverfront that he saw daily from his residence across the river in Chelsea. Whistlerâs printer Thomas Way watched Whistler work on the print, âand later recalled that the artistâs composition was âdrawn in the dark, by feeling not sight.â Whistler before beginning it, commented, âNow let us see if we can remember a Nocturne.â
See "Fleeting Impressions: Prints by James McNeill Whistler,â exh. cat., (Montgmery, AL: Montgomery Museum of Fine Arts, 2006), 85.

Scull
Laborers
Cloudy Sky
Rain
Fog
Factories
Reflections (Surfaces)
Commercial/Shops
Shoreline
Portfolio List Click a portfolio name to view all the objects in that portfolio
This object is a member of the following portfolios:

Your current search criteria is: Keyword is "NI:NJ" and [Object]Display Artist is "James Abbott McNeill Whistler".