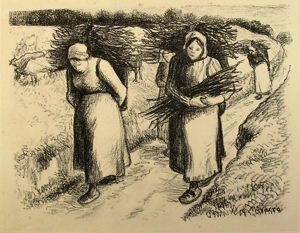 
Pissarroâs impressionist paintings, prints, and drawings often feature peasant subjects, but his artistic imagery does not reflect his political activismâhe was an anarchist. When he worked outside of Paris, he was often drawn to genre scenes that captured the local color of his surroundings, but the art does not make any political statement.

He made a dozen lithographs in 1874 then abandoned the medium for twenty years before returning to it at the end of his life. Then he made about fifty lithographs in a few short years, including this one, which shows no sentimentality and no overt political contentâjust peasants struggling through their incessant chores.

Keywords Click a term to view the records with the same keyword
Cattle
Figure Groups-Women
Fields
Path
Farming
Laborers
Portfolio List Click a portfolio name to view all the objects in that portfolio
This object is a member of the following portfolios:

Your current search criteria is: Keyword is "LY" and [Object]Display Artist is "Camille Pissarro".