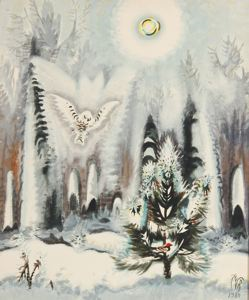 
In his late paintings Charles Burchfield returned to a style that mirrored his earliest works; their focus was on the artist's response to his spiritual relationship with nature. His use of repetitive shapes, such as the shape of the owl's wings, reverberates throughout the painting to harmonize and unify the forms. This work likely refers to his memory of a specific event that happened in 1911, and was later recorded in Burchfield's journal. The artist was inspired by an encounter with an owl and a cardinal as he was walking near his home.

American Paintings from the Montgomery Museum of Fine Arts, cat. no. 74, p. 180.

Keywords Click a term to view the records with the same keyword
Snow
Forest
Moon
Evergreen
Winter
Owl
Portfolio List Click a portfolio name to view all the objects in that portfolio
This object is a member of the following portfolios:

Your current search criteria is: Keyword is "KA:RB".