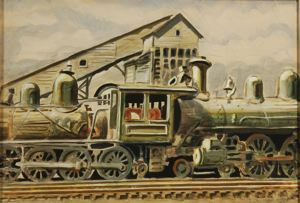 
"Scrapped Locomotives" dates from a period in Charles Burchfieldâs work when he began to explore industrial and regional scenes. Probably painted before he moved to Buffalo, New York, the artist depicts of the Pennsylvania Railroad yards in Wellsville, Ohio. The central focus of the painting is the train, which extends across the paper from right to left. Train tracks can be seen running across the bottom of the paper. The cabin is empty and the work is devoid of human presence. A building, which is either the station house or freight building, is behind the train almost extending to the top of the paper. The work is monumental, as the train occupies almost all of the compositional space. For Burchfield, as for other artists painting industrial subjects from American life in the early twentieth century, the steam locomotive represented more than obsolescent technology; it was emblematic of the passing of time and the ease with which once-powerful forces are forever silenced and consigned to oblivion.

Keywords Click a term to view the records with the same keyword
Industrial
Trains
Engine
Tracks
Aged
Death
Portfolio List Click a portfolio name to view all the objects in that portfolio
This object is a member of the following portfolios:

Your current search criteria is: Keyword is "JV".