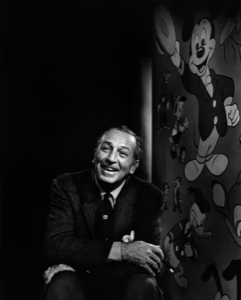 
Walt Disney (1901â1966) Disney created Mickey Mouse, Donald Duck, Chip and Dale, Bambi, and many other beloved cartoon characters. He received fifty-nine Academy Award nominations and won twenty-six Oscarsâmore awards and nominations than any other person. He built Disneyland and Walt Disney World and conceived EPCOT (Experimental Prototype Community of Tomorrow). In this portrait Disney proudly wore the monogram of Smoke Tree Ranch, his beloved, exclusive Palm Springs resort. He specified that the tie tack be included in a posthumous bronze portrait of himself and Mickey Mouse made for Disneyland, perhaps because he had reluctantly sold his stake in the resort to help finance Disneyland.

Keywords Click a term to view the records with the same keyword
Portraits
Male
Ring
Suit
Cartoon Characters
Portfolio List Click a portfolio name to view all the objects in that portfolio
This object is a member of the following portfolios: