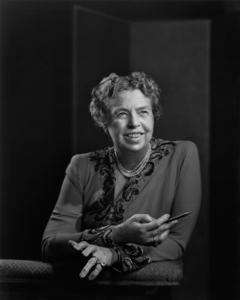 
Eleanor Roosevelt (1884â1962) When Karsh photographed the First Lady, he noted that, âher hands are among the most eloquent I have ever seen.â Karsh, of course, had seen a lot of hands. Hers, he said, âseemed somehow to reveal the woman herself.â For the sitting, Karsh commandeered a folding screen and a chair. Then, âIâ¦allowed Mrs. Rooseveltâs hands to act out, as it were, their natural part in her personalityâ¦. I watched them as carefully as I watched the face and when their gesture seemed to fit exactly the expression I quickly made the exposure.â

Keywords Click a term to view the records with the same keyword
Portraits
Female
Ring
Writing Instruments
Necklace
Portfolio List Click a portfolio name to view all the objects in that portfolio
This object is a member of the following portfolios: