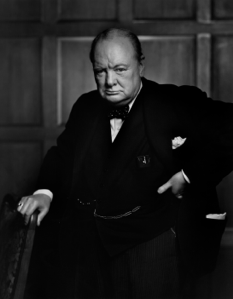 
Winston Churchill (1874â1965) This portrait brought Karsh instant international fame. It was made immediately after Churchill had addressed the Canadian House of Commons on December 30, 1941. The appointment had been squeezed into Great Britainâs prime ministerâs schedule, so he was surprised to find Karsh awaiting him, camera and lights at the ready. He begrudgingly granted two minutes for one photo. Karsh asked him to remove his ubiquitous cigar and when he did not, the photographer respectfully removed it for him, having decided in advance that the man needed no props. When Karsh returned to the camera and saw Churchill scowling, he instinctively released the shutter. Churchill realized heâd been âKarshedâ (a term then not yet in common usage), smiled, and said, âyou may take another.â Karsh did, but Churchillâs saccharine smile in it does not compare with the first portrait, which soon appeared in Life magazine and countless other periodicals, becoming emblematic of all Englandâs fierce grit and fortitude. Churchill then shook the artistâs hand and said, âyou can certainly make a roaring lion stand still.â

Keywords Click a term to view the records with the same keyword
Portraits
Political
Male
Ring
Suit
Portfolio List Click a portfolio name to view all the objects in that portfolio
This object is a member of the following portfolios: