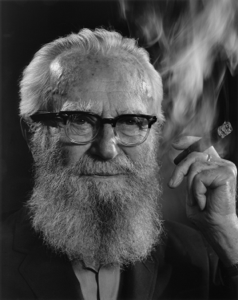 
Edward Steichen (1879â1973) In 1905, Steichen and Alfred Steiglitz established the Little Galleries of the Photo-Session and he assisted with Camera Work, Steiglitzâs influential periodical. Between the world the wars, he was photography director for Conde Nast. He became director of the photography department of the Museum of Modern Art in 1947 and in 1955 organized The Family of Man, a mammoth exhibition of 508 photos from 68 countries. Karsh made his first portrait of Steichen during World War II and published it in his first book, Faces of Destiny (1946). Karsh admired Steichen and portrayed him several times in his old age.

Keywords Click a term to view the records with the same keyword
Portraits
Ring
Eye Glasses
Beard
Smoking Materials
Cigar
Portfolio List Click a portfolio name to view all the objects in that portfolio
This object is a member of the following portfolios: