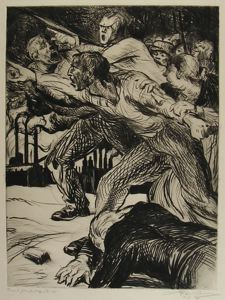 
The economic collapse of the 1930s in the U.S. led to conditions that resulted in many forms of civil unrest. Frustrations boiled over, particularly for those who were poor and most at risk of starvation and losing hard-won homes. Albert Sternerâs "Riot "was influenced by works that depicted angry citizens during the French Revolution who, like this group, charge into a scene that promises violence. The factories with smoke billowing from massive chimneys suggest that they seek the overthrow of the institutionsâgovernment, industry, and business systemsâthat had failed them.

Sterner studied in Paris from the early 1890s until 1918. As a naturalized American citizen, he created many illustrations and limited edition prints that reflected his appreciation for democracy and the American republic, while championing the plight of the working class.

Keywords Click a term to view the records with the same keyword
Figure Groups
Political
Male
Industrial
Riot
Speaking
Laborers
Factories
Portfolio List Click a portfolio name to view all the objects in that portfolio
This object is a member of the following portfolios:

Your current search criteria is: Keyword is "JA" and [Object]Century is "Twentieth Century".