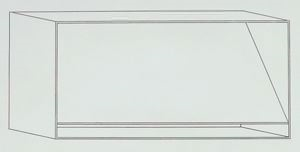 
In the mid-1960s Judd became one of the key figures of the Minimalist art movement. Through his writings and his art he proposed that art could be logical, direct, and unemotional, a contrast to the Abstract Expressionists, whose work was laden with emotional content. Instead, Judd wrote, "A shape, a volume, a color, a surface is something itself. It shouldn't be concealed as part of a fairly different whole."
Through austere and reductive forms seen in both his sculptures and in simple drawings and etchings, Judd presented box-like forms in a neutral way that avoids any symbolic associations. Instead, he sees his forms as either a part of a mathematical sequence or a meditation on mass and voids, tranquility and motion, and illusion and reality. Demonstrating these ideas, Judd created a portfolio of prints including Untitled, 1978. Although Judd made this work in the 1970s it closely aligns with the ideas he explored in sculptures and other works beginning in the 1960s.

Keywords Click a term to view the records with the same keyword
Modern(Contemporary)
Geometric
Portfolio List Click a portfolio name to view all the objects in that portfolio
This object is a member of the following portfolios:

Your current search criteria is: Keyword is "J:PL" and [Object]Display Artist is "Donald Judd".