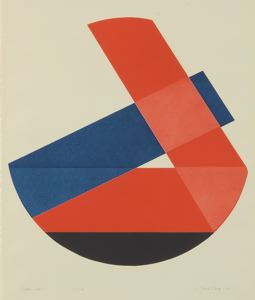 
Like many of his peers, Sonenberg used his art to share his views on the Vietnam War. As part of Angry Arts Week in early 1967, he participated in The Collage of Indignation, a massive collaborative project created by 150 artists and critics over the span of five days protesting the Vietnam War. However, despite using art as an activist tool, Sonenberg's imagery was more abstract in nature.

Sonenberg's use of the collographâa printing process developed in 1955 that became popular in the 1960sâallowed him to work with surface impressions to expand spatial boundaries. These subtle, textural marks combined with his simple composition and limited color choices demonstrate Sonenberg's interest in the reduced forms of Minimalism, a popular art movement of the period that celebrated the reductive qualities of color and form itself. Although the artist created "Sign No. 1" in the early 1970s, it clearly shows his interest in this movement.

Your current search criteria is: Keyword is "J:PL" and [Object]Century is "Twentieth Century" and [Object]Display Artist is "Jack Sonenberg".