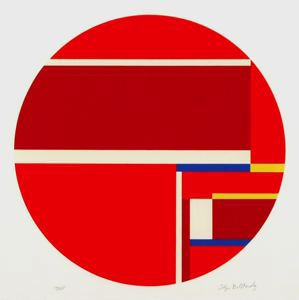 
The style of Russian-American painter and printmaker Ilya Bolotowsky evolved from a variety of inspirations, but ultimately, he became a part of the Neo-Plasticism movement or "De Stijl" (Dutch for "The Style"). Founded in 1917 by painter Piet Mondrian (Dutch, 1872â1944), Neo-Plasticism encompassed ideals of harmony and balance. The artists working in this movement reduced forms to pure abstractions of vertical and horizontal bands in primary colors. The placement and relationships of the forms aimed to conevy a utopian spiritual order.

"Red Tondo" clearly illustrates Bolotowsky's interest in following the ideals of this movement. Yet, the artist did not strictly adhere to any rules in creating his compositions; instead, he relied on his intuition for the placement of his forms. Furthermore, in various interviews, Bolotowsky indicated that while he viewed his art as purely abstract, he felt, that ultimately, they are informed by what the individual viewer sees.

Keywords Click a term to view the records with the same keyword
Geometric
Portfolio List Click a portfolio name to view all the objects in that portfolio
This object is a member of the following portfolios:

Your current search criteria is: Keyword is "J:PL" and [Object]Century is "Twentieth Century" and [Object]Display Artist is "Ilya Bolotowsky".