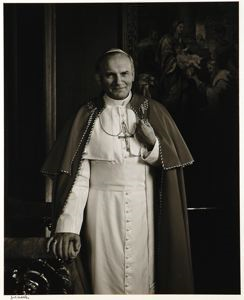 
Pope John Paul II (1920â2005) In October 1978 Cardinal Karol Wojtyla became the first non-Italian Pope in 455 years and the first Pope from Poland. This portrait shows him in the Vaticanâs Hall of Tapestries. In the exhibition catalog Karsh: A Fifty-Year Retrospective, the artist reproduced a color photograph of the Pope from this session. Karsh was a devout Catholic. Around 1960 he published a series of books about the Mass, the Sacraments, Rome, and the Holy Land with the popular American Bishop Fulton J. Sheen.

Keywords Click a term to view the records with the same keyword
Portraits
Male
Religious Figures
Interiors
Jewelry
Ring
Hat
Painting
Portfolio List Click a portfolio name to view all the objects in that portfolio
This object is a member of the following portfolios:

Your current search criteria is: Keyword is "IV:LB".