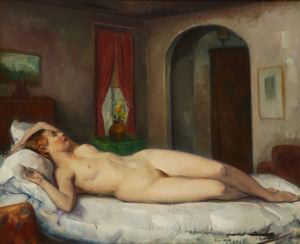 
The painting of nude female figures is an established artistic tradition that was enduringly popular in Europe, but not especially so in America. Kroll painted many similar figure studies during the middle and latter part of his career, suggesting that, "the amazing variety of form and color seems inexhaustible."

"Sleeping Nude" is a typical studio picture, combining figure painting (a staple of the academic tradition) with still life to create an environment of contemplative beauty and luxury. In this composition, Kroll constructed the bedding with broad, blunt brushstrokes reminiscent of the technique of CÃ©zanne. By contrast, the figure itself is carefully delineated and smoothly finished. During a career that spanned over fifty years, Kroll was able to adapt his style to his subject. While he adhered to realism, his eclectic training and artistic influences engendered a facility with styles ranging from Impressionism to the stylized naturalism that emerged in the 1930s.

Keywords Click a term to view the records with the same keyword
Female
Sleep
Nude Female
Body
Bedroom
Painting
Portfolio List Click a portfolio name to view all the objects in that portfolio
This object is a member of the following portfolios:

Your current search criteria is: Keyword is "IV:LB".