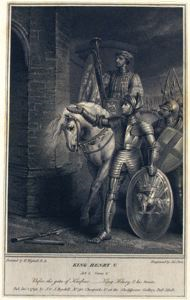 
In 1786, a successful London publisher, alderman John Boydell, conceived of a gallery of art devoted to scenes from Shakespeareâs plays. Named for its founder, the Boydell Shakespeare Gallery was one of the first large-scale commercial endeavors intended to promote British literature and artists both in Great Britain as well as throughout the European continent. He commissioned over 167 paintings of scenes from Shakespeareâs plays and produced engravings based on these paintings. In creating the engravings, John Boydell partnered with his son, Josiah, whose name appears after his fatherâs in the list above. The third name is that of the engraver, and the fourth is that of the painter who created the original composition in oils. The role of the engraver was to transfer the painterâs composition onto plates for printing.

About this scene:
The âwildâ Prince Hal matures into a talented politician, an heroic general, and a king who means to redeem his fatherâs seizure of the crown. Proclaiming his genealogical right to the French throne, Henryâs army besieges Harfleur. He rouses his troops with patriotic appeal, then threatens the desperate city with rapine, murder, and destruction to gain its submission. After Harfleur surrenders, seen here, he charges his kinsman Exeter to govern the city with mercy, as Henry intended, despite his threats.

The outraged French nobles intend to crush him as he marches across northern France, and, vastly outnumbered at Agincourt, Henry prays Godâs mercy on his men, calls them his brothers, and invokes how they will be rememberedâas they are, since they achieved one of historyâs greatest upset victories. Henry then wins the French princessâs hand and promise of the French crown, though he will die only weeks before inheriting it.
-Susan Willis, dramaturg, Alabama Shakespeare Festival, September 28, 2020

Hamlet, Act 4, Scene 7
2016.0009.0003
Portfolio List Click a portfolio name to view all the objects in that portfolio
This object is a member of the following portfolios:

Your current search criteria is: Keyword is "HJ:YE".