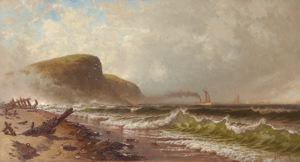 
Bricher was a successful American painter of the second half of the nineteenth century who specialized in marine subjects. He began his career around 1856, and while he may have enjoyed some level of professional training, it appears he was largely self-taught.

The artist seems to have first visited Grand Manan Island in New Brunswick, Canada, in 1874. He returned there in 1883 and made a sketch that was the source for this painting. The work is a study of grey skies and mist, with the added poetic touch of a ship's wreckage on the shore. No human figures are depicted, but man's relationship with the sea is suggested by the derelict debris and by the ships on the distant horizon.


Keywords Click a term to view the records with the same keyword
Seascapes
Rock
Ocean
Beach
Cloudy Sky
Steamboat
Sailing Ship
Waves
Shoreline
Portfolio List Click a portfolio name to view all the objects in that portfolio
This object is a member of the following portfolios:

Your current search criteria is: Keyword is "H" and [Object]Display Artist is "Alfred Thompson Bricher".