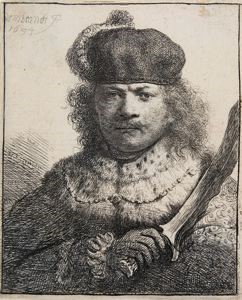 
Rembrandt was one of his own favorite subjects. During the course of his career, he returned to the study of his own features more than seventy-five times in paintings, prints, and drawings. Portrait prints in general were extremely popular throughout the seventeenth century, when they provided the only information most people had about the appearances of rulers, statesmen, and celebrities. Rembrandtâs self-portraits, however, serve many purposes other than the description of his facial features. During the 1630s, his period of greatest artistic success, he presented himself in a wide variety of guises, ranging from beggar to virtuoso artist to melancholic genius. Some of these etchings appear to be studies of facial expressions, while some seem calculated to align Rembrandt with the great artists and poets of the past. In this print, the prominently placed sabre and fierce expression identify him as a warrior.
See "Rembrandt: Beyond the Brush; Master Prints from the Weil Collection," exh. cat. (Montgomery: Montgomery Museum of Fine Arts, 1999), 33.

Keywords Click a term to view the records with the same keyword
Portraits
Figure
Male
Busts
Sword
Clothing
Fancy Hat
Artist's Self Portrait
Portfolio List Click a portfolio name to view all the objects in that portfolio
This object is a member of the following portfolios:

Your current search criteria is: Keyword is "GX" and [Object]Display Artist is "Rembrandt van Rijn".