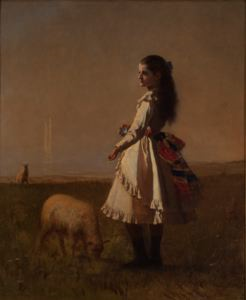 Girl in Landscape with Two Lambs


One of the most cosmopolitan and sought-after painters of his age, Eastman Johnson gained recognition through a series of charming, seemingly spontaneous images of American rural life, executed in a sophisticated, highly controlled manner. Johnson was part of the generation that followed William Sidney Mount as a genre painter in the late nineteenth century. He trained in Dusseldorf, and subsequently in Holland. During and after the Civil War Johnson painted a series of paintings of women and young children in decorative settings. In 1871, he built a summer home on Nantucket Island, and he began painting there out of doors, capturing the shimmering light and atmosphere. After the Civil War, children were often seen as innocents who were at home in and allied with nature, their characters yet unaffected by the increasing complexities of social conformity. They were viewed as the hope for the future of the nation and as embodiments of the desire for peace and prosperity following a nationally divisive conflict. The death of a large number of the nationâs young men in war had created a generational displacement for many young women of every class, who were left with fewer prospects for marriage and traditional roles of domesticity. This young girlâs quiet contemplation could have easily suggested to a contemporary audience her knowledge of the uncertainty of her future.

Keywords Click a term to view the records with the same keyword
Animals
Figure
Female
Water
Child
Fields
Sheep
Clothing
Fashion
Portfolio List Click a portfolio name to view all the objects in that portfolio
This object is a member of the following portfolios:

Your current search criteria is: Keyword is "GJ".