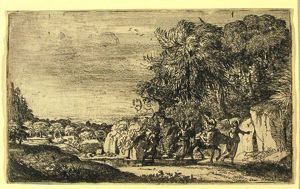 
Throughout the course of his career, Claude treated the subject of this print, the Holy Familyâs escape into Egypt during Herodâs massacre of the innocents, in drawings, paintings, and prints. In this relatively early etching in Claudeâs oeuvre, Mary and Jesus ride a donkey trailed by Joseph and flanked by angels. The figures are difficult to detect against the dark mass of foliageâa problem with all three states of this print, but one that Claude resolved in later depictions of the subject.
Claudeâs technique typically involved the creation of a detailed drawing, which he then traced onto a waxed plate. Next, he scratched the plate and etched it, followed by more scraping, burnishing, and often re-etching. His results achieved great renown in his own day, and have continued to be valued down to the present. Delicate variations in shading and difficult effects of transparency contributed to his masterful representation of landscape. Indeed, Claudeâs atmospheric Arcadian scenes have influenced countless artists and established a high standard of excellence for all subsequent landscape art.

Keywords Click a term to view the records with the same keyword
New Testament
Jesus
Mary, Mother of Jesus
Joseph, Father of Jesus
Angels
Tree
Mule
Portfolio List Click a portfolio name to view all the objects in that portfolio
This object is a member of the following portfolios:

Your current search criteria is: Keyword is "GG".