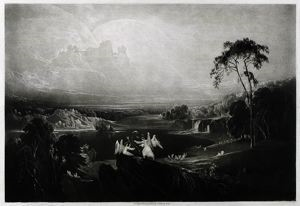 
John Martinâs earliest mezzotints were created between 1824 and 1827 as book illustrations for John Miltonâs âParadise Lostâ (1667). He worked with an American publisher then living in London, Septimus Prowett (American, fl. 1822-1827), who was not particularly well known nor well-funded, but the enterprise was so successful that the works were reproduced multiple times between 1825 and 1876.

The composition for "HeavenâThe Rivers of Bliss" is Martin's fairly literal interpretation of line 78 from Book XI of Milton's "Paradise Lost." "...The angelick blast filled all the regions: from their blissful bowers of amarantine shade, fountain or spring, by the waters of life, where'er they sat in fellowships of joy, the sons of light hasted, resorting to the summons high; and took their seats; til from his throne supreme the Almighty thus pronounced his sovran will..." The mezzotint process, with its ability to create very strong tonal contrasts, allows the artist to make the sky glow with the brilliance of a heavenly light, contrasting this realm with the gruesome darkness of hell as depicted in other works from the series. Typically, he subordinates the figures in the work to the magnificent sweep of landscape and the magical suggestion of a heavenly city in the distance. This early composition foreshadows two very important later paintings by the artist: "The Celestial City and the River of Bliss" from 1841, and "The Plains of Heaven," about 1851-53 now in the collection of the Tate Britain (TO1928). The Museum's impression is from the Imperial Folio edition that was limited to 50 copies.

Keywords Click a term to view the records with the same keyword
Figure Groups
Apochrypha
Fields
Forest
Theatrical
Music
Religious Figures
Angels
Tree
Hilly
Cloudy Sky
Plains
Imaginary
Portfolio List Click a portfolio name to view all the objects in that portfolio
This object is a member of the following portfolios:

Your current search criteria is: Keyword is "G:KD" and [Object]Century is "Nineteenth Century".