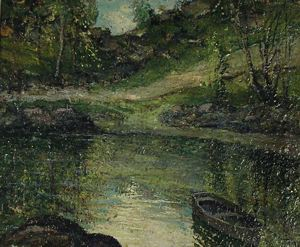 
Lawson was a member of the early twentieth-century group known as The Eight, however he is also characterized as an impressionist. His training with American Impressionist painters J. Alden Weir and John H. Twachtman influenced Lawson's method of building up layers of paint by application of small, sparkling strokes of color. His approach is exemplified in this landscape in which rich tones of blue and green create a web-like surface and light seems to dance from the reflections on the narrow stream. Although Lawson lived in Manhattan, he chose his landscape subjects from the areas outside the urban borders of the city, which were accessible to him, and depicted by him, in all seasons and at varying times of day.

Keywords Click a term to view the records with the same keyword
Rock
Forest
Pond
Stream
Tree
Row Boat
Portfolio List Click a portfolio name to view all the objects in that portfolio
This object is a member of the following portfolios:

Your current search criteria is: Keyword is "G:DQ".