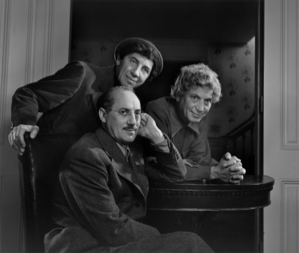 
Marx Brothers: Chico (Leonard, 1887â1961), Harpo (Arthur, 1888â1964), and Groucho (Julius Henry, 1890â1977) First in vaudeville, then on stage, films, radio, and television, the zany antics of Groucho, Harpo, and Chico kept the world in stitches for half a century. Their films include Monkey Business (1931), Horse Feathers (1932), Duck Soup (1933), and A Night at the Opera (1935). Karsh photographed the Marx Brothers in Hollywood as part of a lucrative contract through J. Walter Thompson, then the largest advertising agency in North America. In the mid 1940s, Karsh routinely received $300 for a portrait sitting and about $400 for a set of prints plus travel expenses.

Keywords Click a term to view the records with the same keyword
Portraits
Figure Groups-Men
Humor
Eye Glasses
Hat
Portfolio List Click a portfolio name to view all the objects in that portfolio
This object is a member of the following portfolios:

Your current search criteria is: Keyword is "FC" and [Object]Object Type is "Photograph".