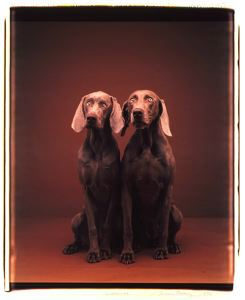 
Wegman's first forays into photography were in the black and white process, but when he began making large format Polaroid prints he made color an important component of his compositional schemes. Wegman indicated that he enjoyed using the Polaroid process because, "there could be no revision, no cropping...if there was a decisive moment, it would be through a setup awaiting a surprise accident."

Commonly in studio photographs such as this one Wegman dressed the dogs in humans' clothing, or in some other way altered their appearance. He would frequently place them in ungainly poses in order to contrast the seriousness of the dogs' expressions with their unlikely circumstances. In this composition, however, Wegman has created a simple, straightforward depiction of dogs mimicking human behavior. The title of the work, "Audience", is the viewer's clue to the artist's intent. The dogs are seated adjacent to one another as if in adjoining seats. They are at rest, but alert, their eyes and ears suggesting that they are enthralled by something that is occurring in front of the picture plane and behind the viewer. The rusty reddish cast of the surrounding light suggests the glow emanating from a stage or screen that illuminates the audience.

The lack of background setting, props or clothing emphasizes the dogs' natural beauty, their elegant, streamlined bodies and their shiny coats. Wegman contrasts their sophisticated forms (perhaps thinking of the overdressed patrons of an opera on opening night) with the quizzical looks that are the dogs' natural expression, creating a subtle dichotomy that ironically juxtaposes the physically refined with the mentally bemused. The subject of the work is not the dogs at all, but their theater-going human counterparts whose intent is as much to be seen as to see.

Keywords Click a term to view the records with the same keyword
Dogs
Portraits
Figure Groups
Theatrical
Humor
Dog
Portfolio List Click a portfolio name to view all the objects in that portfolio
This object is a member of the following portfolios:

Your current search criteria is: Keyword is "FC" and [Object]Object Type is "Photograph".