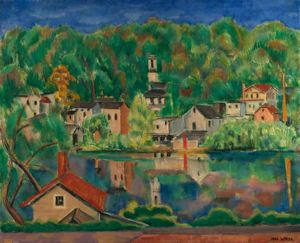 
Max Weber was one of the earliest American artists to adopt the innovative styles of European ModernismâCubism and Post-Impressionismâand incorporate those styles into his own work. "View of Roslyn, New York," illustrates Weberâs admiration for the work of the great French Post-Impressionist painter, Paul Cezanne (French, 1839-1906). It was during Weberâs visit to Paris that, at the end of Cezanneâs life, Cezanne's work was exhibited to much acclaim.

In May of 1921, Weber and his young wife Frances bought their first home near Garden City, Long Island. He began traveling the countryside on the North Shore of Long Island seeking out subjects for his landscape paintings, making sketches and returning to the studio to create the final oils. "View of Roslyn, New York", is a canvas he created after one of these excursions; the town of Roslyn was only a few miles away from his home. In its composition, palette, and directional, modeling brushwork the painting reflects the artistâs ongoing admiration for the work of Cezanne.

Keywords Click a term to view the records with the same keyword
Landscapes
Buildings
Pond
Reflections (Surfaces)
Portfolio List Click a portfolio name to view all the objects in that portfolio
This object is a member of the following portfolios:

Your current search criteria is: Keyword is "DR".