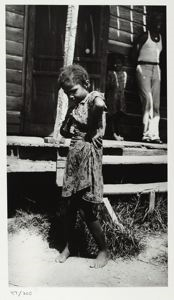 
In 1997, the Montgomery Museum of Fine Arts acquired five of Eudora Welty's photographic images. Welty herself selected the work, which was offered in the later 1990âs as part of a 5 image set, sold by the Mississippi Department of Archives and History. The portfolio, entitled "The Home Places: Photographs by Eudora Welty", consists of five contemporary prints from vintage negatives Eudora Welty made with her personal camera. The imagesâ "Pigs and Sheets, Jackson"; "Man with Watermelons"; "Saturday Off, Jackson"; "Girl Dancing, Jackson"; and Going to Town, Utica", were selected with the assistance of Patti Black, the former director of the Mississippi State Archives, and printed in an edition of 300 by James Patterson. The images were from the period just before her commitment to writing full time, and just after the start of the Depression. These photos demonstrate the snapshot style for which Welty has been commended.