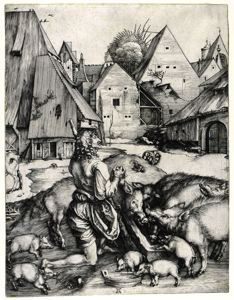 
The originality of Durerâs engraving is found in his choice of the moment from the parable (Luke 15:11-32) to depict. Instead of showing the prodigal son in a brothel or tavern, or discontentedly tending the swineâboth popular subjects in the early fifteenth centuryâDÃ¼rer portrayed him in penance, kneeling with hands clasped and gazing upward, in the middle of a barnyard setting. In addition to this novel focus, DÃ¼rer also began to master the techniques of engraving, taking them to levels not previously seen. Through varying the shape, length, and depth of the engraved lines, together with adding quick flecks of the burin, DÃ¼rer successfully captured different textures such as the pigsâ bristles, and the wood, brick, and thatching of the buildings. His achievement in producing a rich vocabulary with engraving tools no doubt began with DÃ¼rerâs early training as a goldsmith under his father. Though the print demonstrates some problems with anatomy and composition, particularly the sharp transition between the central figure and the background, it is nevertheless ambitious in technique and unique in iconography.

Keywords Click a term to view the records with the same keyword
Figure
Male
New Testament
House
Pig
Farm Buildings
Portfolio List Click a portfolio name to view all the objects in that portfolio
This object is a member of the following portfolios:

Your current search criteria is: Keyword is "DI:DJ" and [Object]Century is "Fifteenth Century".