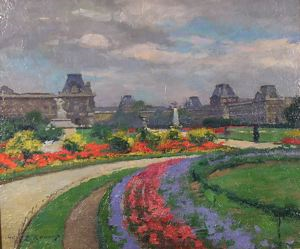 
The Tuileries Garden was designed and planted in 1564 for Queen Catherine de Medici on property adjacent to the Louvre Palace in Paris. Modeled on the gardens of her native Florence, Catherine built both a palace as well as the garden on land that had previously housed workshops, known as tuileries, for the production of roof tiles. The Gardens became a public park after the French Revolution, and in the 19th century, a place for relaxation, festivity, and entertainment for the citizens of Paris.

Keywords Click a term to view the records with the same keyword
Gardenscape
Buildings
Flower
Sculpture
Spring
Portfolio List Click a portfolio name to view all the objects in that portfolio
This object is a member of the following portfolios:

Your current search criteria is: Keyword is "CZ".