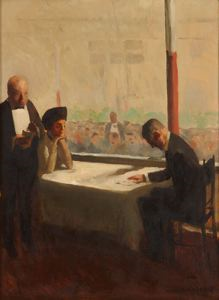 
"The Diners" dates from early in du Boisâ career. During this period, du Bois was actively writing art criticism for several publications, as well as assisting with the organization of the Armory Show, and thus his paintings were executed as time allowed. While he painted on canvas, during this stage of his career he also painted on wooden panel, which is the support for this work. The subject matterâupper class individuals seen in a public settingâwas typical for the artist both in his early painted works and in his drawings.

"The Diners" illustrates an important aspect of the artistâs approach to his subject matter; that is the relationship between men and women of the upper classes. In this work, both parties are quite reserved, isolated from both their environment and from each other. The sideways glance of the waiter who stands at the ready reinforces the air of tension in this arrested moment. Compositionally, the isolation of the figures is increased by the reflected light on the surface of the table and the shadow of the support column that falls between them. The stiffness of the figures is further accentuated by the architectural columns that anchor them visually. This cool and dispassionate presentation reflects du Boisâ frequent observation of members of the upper classes as participants in a drama of quiet desperation.


Keywords Click a term to view the records with the same keyword
Portraits
Figure Groups
Dining
Table
Fancy Hat
Waiter
Fashion
Restaurant
Menu
Portfolio List Click a portfolio name to view all the objects in that portfolio
This object is a member of the following portfolios: