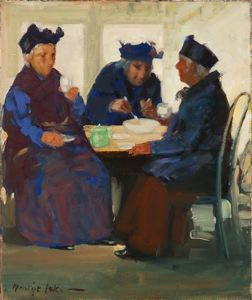 
Elderly women were a favorite subject of Luks's, particularly during the 1920s and 1930s. The technique seen in "Tea Party" is typical of his work overall, particularly in the use of broad blocks of color to depict objects and the lack of delineation in the figuresâ faces and clothing. The painting conveys the sense of clear and immediate observationâLuks enveloped the women in warm and cheerful light, capturing their postures in silhouette against a bright background. He depicted the easy familiarity of dowagers in company; while the term âtea partyâ suggests a formal social ritual, these women are companionable and contented. They are individual people, but they are also types that Luks would have seen daily in the urban setting.

Keywords Click a term to view the records with the same keyword
Teacup
Figure Groups-Women
Dining
Table
Plate
Interiors
Aged
Hat
Coat
Window Light
Satire
Portfolio List Click a portfolio name to view all the objects in that portfolio
This object is a member of the following portfolios: