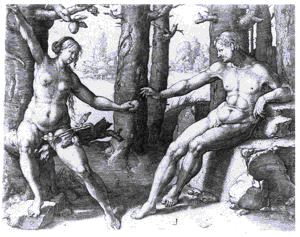 
The print in the MMFA collection, "The Fall of Man", is one of van Leyden's late works. The subject was a favorite of van Leyden's and he created nine different versions. This print from 1530 shows the figures in unorthodox seated poses, similar to that of a 1508 version. However, in this later version, van Leyden has fully achieved the Italianate effects for which he had striven in the intervening 22 years. The figures of Adam and Eve have volume, ample proportion and flowing movement, while the work is marked by a use of chiaroscuro. As well the landscape is more generalized and serves as a backdrop for the figures. The composition reveals the extensive influence of Marcantonio Raimondi's work on van Leyden's prints from this period. Jacobowitz and Stepanek have noted that "the sinful versus pure nature of the protagonists is explicitly stated by their appearance. Eve opens up her body, casting her extremities outward and implying her enlightenment by her restless conduct. Her genital covering and proffering of the fruit verify her sinful state. Adam languishes against a rock, receptive, but still unmoved by the new knowledge. His inevitable fall is indicated by his outstretched arm and intense gaze." This print is the second state of four.

Keywords Click a term to view the records with the same keyword
Old Testament
Fruit
Religious Figures
Nude Female
Nude Male
Tree
Snake
Portfolio List Click a portfolio name to view all the objects in that portfolio
This object is a member of the following portfolios:

Your current search criteria is: Keyword is "CJ".