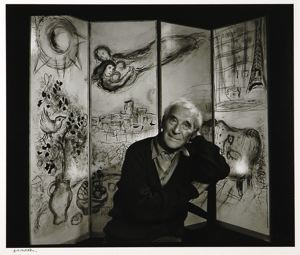 
Marc Chagall (1887â1985) Chagall was born in Vitebsk, Russia and grew up in a Hasidic Jewish community. He moved to Paris in 1910 and remained in France most of his life, absorbing Cubism, Suprematism, Surrealism and other avant-garde innovations and assimilating them into his native Russian-Jewish vernacular tradition. Karsh selected this image of Chagall seated before one of his painted folding screens to publish in both Karsh Portfolio (1967) and Karsh Portraits (1976). He also duplicated his caption, in which he talked about the gentle warmth of the artistâs personality and his laughter.

Your current search criteria is: Keyword is "CJ".