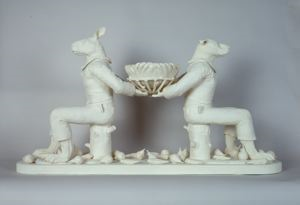 
Credit Line: Gift of Jackie Aronov in memory of her parents, Tillie and Louis Bern


The Dogman/Rabbitman Container in the MMFA collection is characteristic of Fleming's enigmatic style. Both anthropomorphized animals are highly and realistically detailed as are the other parts of the work. The animals dress as humans and are a strange hybrid of human and animal parts. Characteristically, there is a subtle undertone of humor in the work that springs partly from dressing animals like humans, but also from using expressionless, hybrid animal/humans as supports for the central bowl, a role usually performed by nymphs and other lovely women in decorative arts designs. The Dogman/Rabbitman Container is one of a series of works Fleming produced during a roughly two to three year period which were a combination of sculpture and functional objects such as soup tureens, baskets, etc.

Keywords Click a term to view the records with the same keyword
Dogs
Food
Rabbit
Vegetables
Bowl
Portfolio List Click a portfolio name to view all the objects in that portfolio
This object is a member of the following portfolios:

Your current search criteria is: Keyword is "BG:OA".