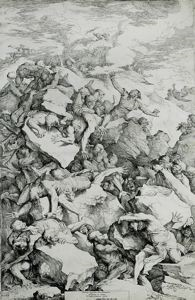 The Fall of the Giants

Medium and Support: Etching and drypoint on paper
Accession Number: 1993.0002


This dramatic mythological scene depicting the giantsâ defeat by the gods illustrates the large-scale and dynamic compositions popular in Naples during the Baroque period. Rosa hoped that this oversize composition would lead to the painting commissions which solidified an artist's fame and fortune. He prepared more than a dozen drawings for this large etching, but it never led to a painting commission.

Rosa created "The Fall of the Giants" late in his career, concurrent with production of "The Rescue of the Infant Oedipus," and about one year after making "The Death of Atilius Regulus" and "The Crucifixion of Polycrates." All four prints are the same size and deal with themes of downfall or ruin. âIn etching style and technique,â scholar Richard Wallace says, âthe Giants and Oedipus are the richest and most varied of all of Rosaâs large prints.â He considers the Giants, âthe most progressively and daringly Baroque of all of Rosaâs prints, drawings, or etchings, especially in its use of spatial illusionism.â Rosa made four large and six small drawings for the Giantsâmore than he made for any other etching. Wallace notes that they were âall done with great dash and energy,â and one was made full-scale, perhaps as a cartoon. In Wallaceâs assessment, the etched lines in the Giants âhave much of the slashing power of the preparatory drawings and are brilliantly used to echo and reinforce the jagged, angular qualities of individual forms and of the composition as a whole.â

Keywords Click a term to view the records with the same keyword
Mythological
Allegorical
Legendary
Fighting
Portfolio List Click a portfolio name to view all the objects in that portfolio
This object is a member of the following portfolios:

Your current search criteria is: Keyword is "BD".