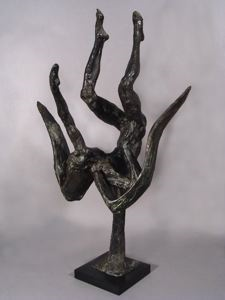 
Charles Umlauf was a teacher at the University of Texas Art Department for forty years, and a respected figurative sculptor. "Icarus" was cast in about 1961, the composition later commissioned at a monumental scale for the Phillips Petroleum Building in Bartlesville, Oklahoma.

Icarus is a subject of Greek legend. His father, Daedalus, fashioned two pair of wings of wax and feathers for himself and his son to escape exile on the island of Crete. Daedalus warned his son not to fly too close to the sun, nor too close to the sea. Overcome with the pleasure of flight, Icarus flew too high and too close to the sun, which melted the wax. His wings destroyed, Icarus fell into the sea in an area that bears his name, the Icarian Sea, near Icaria, an island southwest of Samos.

Back and Proper Right Side
Portfolio List Click a portfolio name to view all the objects in that portfolio
This object is a member of the following portfolios:

Your current search criteria is: Keyword is "BD" and [Object]Object Type is "Sculpture".