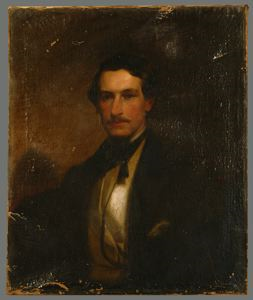 Portrait of a Creole Gentleman


The Portrait of A Creole Gentleman is signed âReinhardt,â inscribed âN.O.â and dated 1862 along the proper right edge of the canvas. If the inscription (which is somewhat indistinct) is accurate, It must be one of few portraits painted in New Orleansâor anywhere in the Southâduring the Civil War that still survives. The title was given to the work by the dealer, Issac Monroe Cline, who gave the work to the museum in the early 1940s and thus it's accuracy is debateable. Nevertheless, the picture has great merit. We cannot compare this portrait with others of the same subject to assess its realism, but can clearly see that Reinhardt had mastered the anatomy of the human figure, and he achieved a convincing three-dimensionality of form through modeling in light and shade.

Moreover, he captured a sense of the subjectâs personality, primarily through the pensive gaze that seems to focus far behind the viewer. Perhaps the young man was contemplating the war, its impact on his business or personal interests. Maybe he was thinking of enlisting, or maybe he had already done so and had commissioned this portrait for his family prior to his departure for military service. On the other hand, it could be a picture of a deceased soldier painted from a photograph or from another portrait, but the warmth of the portrayal and the naturalness of the pose argue for this being painted from life.

Keywords Click a term to view the records with the same keyword
Portraits
Male
Busts
Portfolio List Click a portfolio name to view all the objects in that portfolio
This object is a member of the following portfolios: