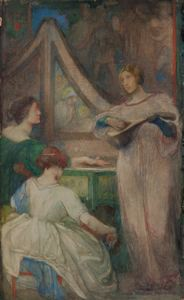 
Credit Line: Gift of the Alabama Department of Archives and History, by transfer; Gift of Mrs. Lela Legare


Clara Weaver Parrish was the descendent of a prominent Alabama landholding family, the Weavers of Emerald Place plantation in Dallas County, Alabama. Her family were supportive of their second daughter's interest in the visual arts, and sent her to study at the Art Students League in New York between 1880 and 1883. She eventually became an important designer within the sphere of Louis Comfort Tiffany and his design firm, Tiffany and Company.

"The Music Lesson" demonstrates elements of the stylistic movement that was most influential on Parrish's work, that of the American Renaissance. This movement, best known for its influence on interior design and architecture, was in vogue in the 1880s when Parrish was in art school, and echoes of this style continued into the early twentieth century. Designers and artists devoted to this approach sought to recapture the elegance and oppulence that was associated with the classicizing art of fifteenth-century Italy, glorifying the the European traditions of civlization and learning. This composition of three women engaged in music making, arranged before what appears to be an altarpiece or tapestry, conveys the spirit of the American Renaissance, with its emphasis on historical textiles and costumes, and a refined blending of brilliant, jewel-like color.

Keywords Click a term to view the records with the same keyword
Female
Figure Groups-Women
Musician
Music
Musical Instruments
Interiors
Lute
Period Dress
Portfolio List Click a portfolio name to view all the objects in that portfolio
This object is a member of the following portfolios: