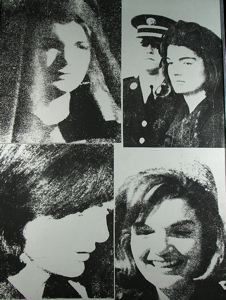 
Andy Warhol is one of the artists most closely associated with the American Pop movement for his utilization of images found in popular culture and in the media as the basis of his work. For example, Warhol created "Jacqueline Kennedy III," after the assassination of President John F. Kennedy on November 22, 1963, an event that saturated the media. Warhol noted all of the coverage, stating, "What bothered me was the way television and radio were programming everybody to feel so sad. It seemed like no matter how hard you tried, you couldnât get away from the thing."

In particular, Warhol found images portraying Kennedyâs widow Jacqueline Bouvier Kennedy fascinating. Culling many of these images from print media he embarked on a series of works featuring the first lady. In the silkscreen "Jacqueline Kennedy III," Warhol juxtaposes four different photographs: one taken at JFK's funeral; one of Jackie standing with a soldier taken from the cover of the December 6, 1963 issue of "Life Magazine"; one as she witnesses Lyndon B. Johnson take the oath of office; and a smiling Jackie taken during the motorcade just prior to the shooting. Warhol's use of simple repetition examines not only the numbing aspects of a visual assault of images in the media but also the elevation of Jackie Kennedy to a media icon.


Keywords Click a term to view the records with the same keyword
Portraits
Historical
Political
Royalty
Violence
Hat
Fashion
Sadness
Mourning
Period Dress
Portfolio List Click a portfolio name to view all the objects in that portfolio
This object is a member of the following portfolios: